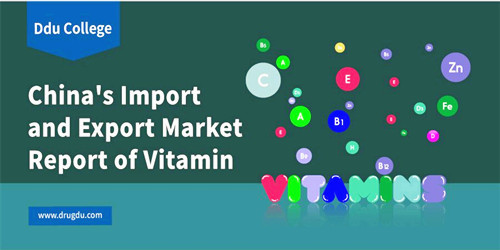 Vitamins are trace organic substances that humans and animals must obtain from food to maintain normal physiological functions. They play an important role in human growth, metabolism, and development.

They consist of many types and different chemical structures and most of them are components of coenzymes (or prosthetic groups) of certain enzymes, and are mainly classified into fat-soluble vitamins (vitamin A, vitamin D, vitamin E, vitamin K) and water-soluble vitamins (B vitamins, vitamin C, etc.)

I.  Global situation of the vitamins market

Vitamins have become one of the major bulk products in the international market. At the end of the 20th century, the market value of various vitamin raw materials consumed every year in the pharmaceutical, nutraceutical and other industries around the world, reached 2.5 billion USD. Among the varieties of vitamins, vitamin C, vitamin E, and vitamin A have become the three pillar products in the international vitamin market with total annual sales exceeding 2 billion USD.

What's more, most varieties have formed oligopolistic competition market patterns, such as VE (vitamin E) and VA (vitamin A) monopolized by DSM, BASF and NHU with a stable competition  pattern and over 70% CR4 capacity while there are 6 global vitamin C suppliers. In addition to the factory of DSM in Scotland, the remaining 5 are in China, namely CSPC Pharma, Northeast Pharma, NCPC, Aland and Luwei Pharma. 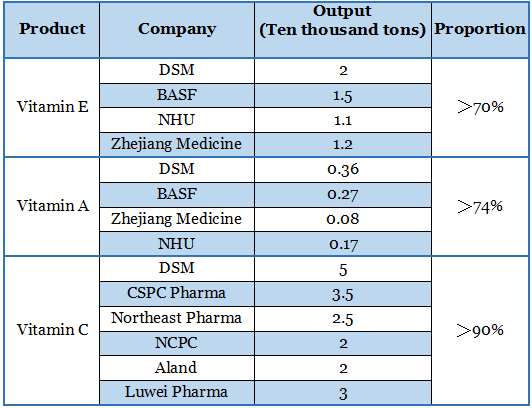 China is a major producer of vitamins and is one of the very few countries able to produce all vitamin varieties mentioned so far.

According to statistics from China Pharmaceutical Industry Association (CPIA) and Feed Industry Association (CFIA), China's vitamin production in 2017 reached 290,000 tons, which was the same as the previous year, accounting for 70.9% of the world's total output. Because of the dramatic increase in price, the market value rocketed to 3.44 billion USD, an increase of 22.7% over the same period of the previous year. 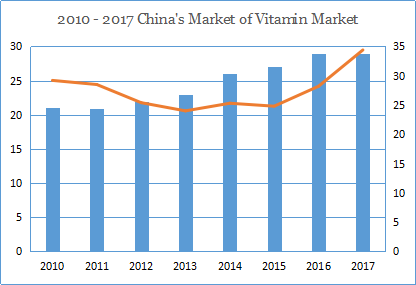 Vitamin E, vitamin C and vitamin A are the main products of China's vitamin market. According to statistics from the CPIA and the CFIA, China's vitamin E output accounted for the largest international market share with 95,000 tons in 2016.

Although China joined the market for vitamin E production relatively late, its market is growing rapidly and with increasing efforts in R&D and breakthrough progress in production technology and equipment of natural VE and other areas, China's natural vitamin E's annual output has increased significantly. 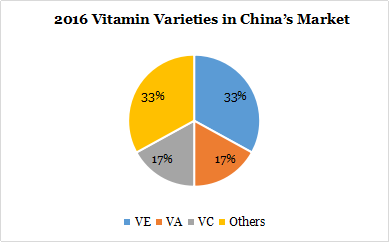 Vitamin A, as one of the three most popular products in China's vitamin market, is increasing in demand.

Given the high technical threshold for the production of vitamin A, currently only NHU, Zhejiang Medicine and Xiamen Kingdomway have achieved large-scale production. Therefore, the domestic market is in short supply and extra drugs are imported to meet demands.

The following chart shows the trends of China’s import of vitamin A from 2010 to 2016. 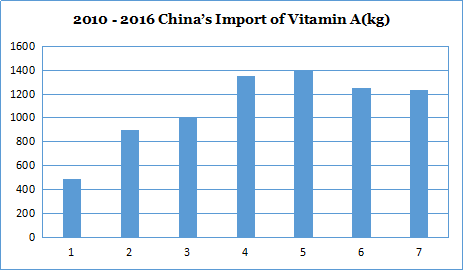 Despite the fact that China is a big producer of vitamin C, there is a great imbalance between its production and consumption. Most of the vitamin C produced in China is exported as domestic consumption per capita is far lower than the per capita consumption of 60-90 grams of developed countries in Europe and North America.

Nowadays, China has become one of the world's largest exporters of vitamins as a result of the country’s production technology and product quality.

Almost all the vitamins in the domestic market are now produced by wholly-owned or joint ventures in the country, and a large part of them are exported, making China an important vitamin supplier in the international market. According China customs, the total amount of China's export of vitamins in 2017 was 224,000 tons, a year-on-year increase of 1.3% with an export value amounting to 2.65 billion USD (a year-on-year increase of 22.7%). 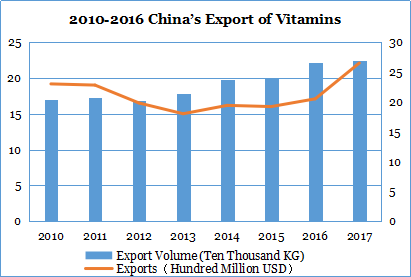 Vitamin E and vitamin C accounted for 88% of total exports while the international vitamin C market has been monopolized by China due to advantages in technology and production capacity.

From the perspective of China’s vitamin export structure, the main export countries are the United States, Germany, the Netherlands, Japan, Canada, Thailand, and Brazil.

Reliable and recognized brands of internationally renowned pharmaceuticals and cosmeticscompany

Indication: Calcium-D-Pantothenate belongs to vitamin B. It is part of Coenzyme A and is mainly used in medicine, food, and feed.

VI.  There aregreat prospects in the vitamin market

With the improvement of people's living standards and the enhancement of their own health care awareness, the market for vitamin health products is rapidly growing with broad potential. Globally, vitamins are the most important nutritional health products and it's widely acknowledged that they help to maintain human health. According to IMS statistics, in the USA, the market of healthcare products exceeds 8 to10 billion USD, accounting for 15% of the entire health care product market.

In addition to the stable markets of developed countries in Europe and the United States, markets in emerging countries such as the Asia-Pacific region are showing rapid growth, and are catching up. The SARS epidemic in China and Southeast Asia in 2003 also resulted in people becoming more health aware.