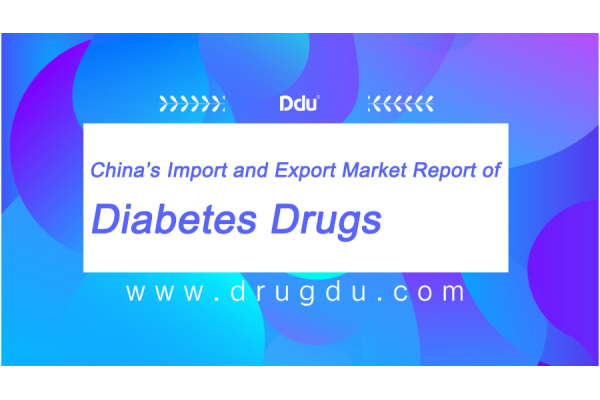 Diabetes is one of the most common chronic diseases and is mainly classified into type 1 diabetes, type 2 diabetes, gestational diabetes and others. Worldwide, 90% of diabetic patients suffer from type 2 diabetes, which greatly promotes the development of the diabetes drug market.

According to the article "World's Top Ten Diabetes Drugs" released by FiercePharma 2016, the diabetes market is currently dominated by pharmaceutical giants such as Novo Nordisk, Sanofi, Merck, Eli Lilly, AstraZeneca and Johnson & Johnson. 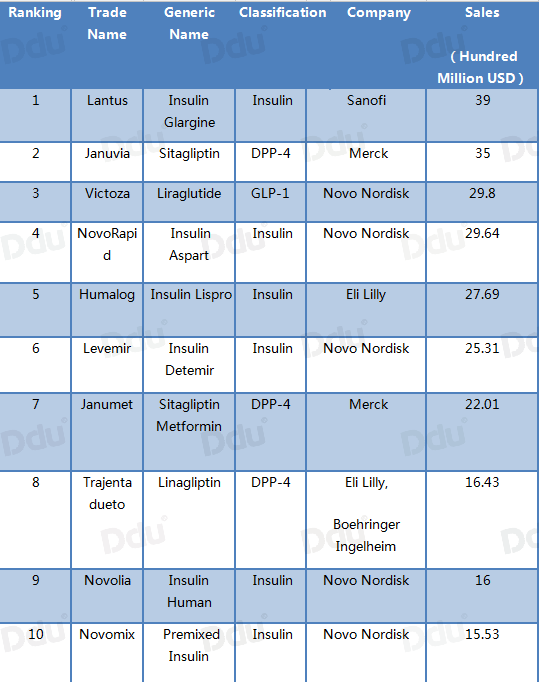 China is the country with the largest number of diabetic patients and the fastest growing prevalence of diabetes in the world. And with this increasing prevalence of diabetes, improvement of people’s living and medical standards, the market for diabetes medicines in China is expanding year by year. It is expected that by 2022, the market size will be close to 43.7 billion Yuan. 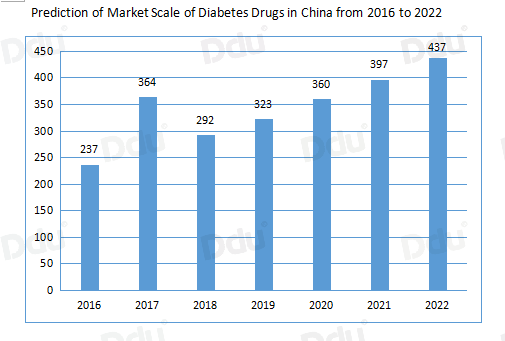 At present, the domestic diabetes market has been monopolized by foreign companies, but it is worth mentioning that domestically produced hypoglycemic agents are gradually emerging in the this field and some products have gained a significant market share, such as Acarbose tablets from Huadong Medicine and insulin glargine injection from Gan & Lee Pharmaceuticals.

According to IDF statistics, the rankings of China's best-selling diabetes drugs in 2016 were as follows: Treatment for diabetes has always been a battleground for many drug companies, and with the rise in the incidence of diabetes, the demand for diabetes drugs has become higher.

With the advent of the patent cliff, the domestic market for diabetes drugs discovery has been extremely active under the attraction of huge markets. According to the database of yaozh.com, relevant clinical trials of diabetes drugs in 2017 were as follows: 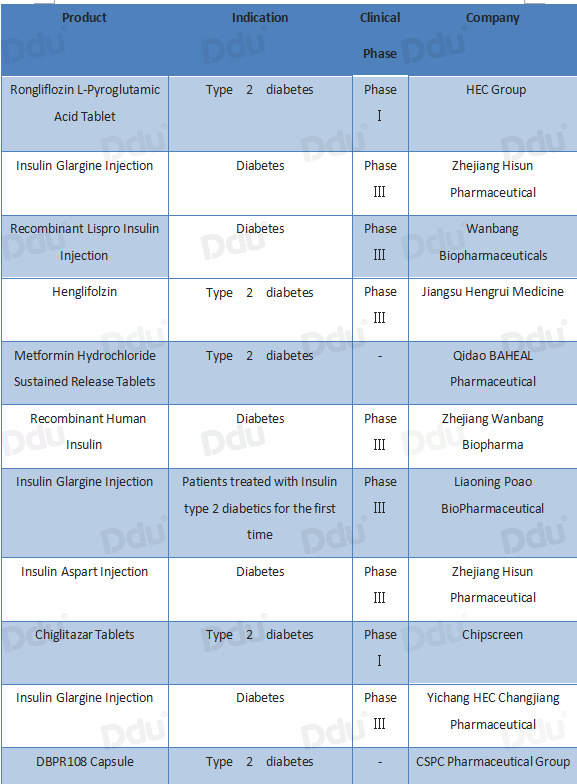 Due to the aging of most domestic products, there is still a gap between imported products and foreign products. Currently, the domestic market for diabetes drugs is dominated by foreign brands, especially Bayer Healthcare whose competitive product, Acarbose, monopolized 30% of all market shares.

As new foreign-funded drugs surge into China, Dapagliflozin, empagliflozin and Canagliflozin also accounted for a certain share of the imports. According to Chinese customs’ statistics, China’s diabetes drugs imports amounted to 4.406 billion USD in 2016:

Imported drugs, whether oral drugs or insulin, have almost secured monopoly in terms of diabetes treatment. However, with the improvement of pharmaceutical technology of Chinese pharmaceutical companies, many domestic generic drugs are also increasingly welcomed by foreign markets.

Insulin glargine injection from Gan & Lee Pharmaceuticals, as the first generic drug in domestic market, has been a leader in the production, research and development of insulin in China. Its main exporting countries are Mexico, Pakistan and Thailand where the biopharmaceutical industry started relatively late with great demand.

In addition to this, Gan & Lee Pharmaceuticals has succeeded in occupying a position in India (an emerging market where the biopharmaceutical industry is well developed) due to its excellent quality. Other Chinese companies doing well in this field are Hisun Pharmaceutical and Dongbao Diabetes.

A professional company specializing in the biosynthesis of human insulin analogues focused on being a leader in the field both in China and abroad in terms of development and production of bio-synthesized human insulin and its analogues.

One of the top 100 enterprises with comprehensive strengths in the Chinese chemical and pharmaceutical industry and industrial group composed of raw material medicines, pharmaceutical preparations, biological medicines, innovative drugs, and commercial circulation.

Major exporting regions: More than 70 countries and regions such as Europe, America and Asia

A large pharmaceutical company that produces Chinese and Western medicines and biological medicines.

With the increasing awareness of diabetes and the constant discovery of new treatments for diabetes, the demand for diabetes drugs has been on the rise. At present, the market for diabetes drugs is divided into western medicine and traditional Chinese medicine. Western medicine has a strong and rapid hypoglycemic effect, but it often lacks overall coordination, which is not conducive to the long-term use of diabetic patients, while Chinese medicine starts with overall regulation with fewer adverse reactions and can improve clinical symptoms and effectively prevent complications, but its hypoglycemic effect works slower.

Ddu, the leading global pharmaceutical & medical device B2B online platform, suggests that, in the study of modern medical research methods of Western medicine, it's of great importance for us to learn from each other's strengths and combine them to emphasize syndrome differentiation and individualized drug administration, to control blood sugar, prevent and treat the occurrence and development of diabetic complications, and improve the quality of the lives of patients. In all, China's pharmaceutical companies still have great room for development in the diabetes drug industry.