Research by the World Health Organization has shown that“Physically, it is much more difficult to stop the production of millions of sperm per day for men than to prevent women from releasing an egg every month.”

I. General situation of the global contraceptive drugs market

According to the statistics of the UN database, the major areas of global consumption of contraceptives are mainly distributed across North America, Asia and the European Union with the main countries being the United States, Belgium, Russia, Canada and the United Kingdom. 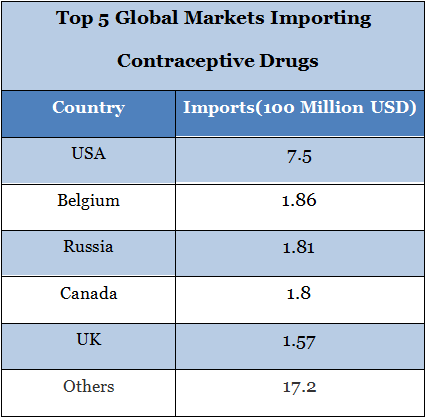 According to the International Planned Parenthood Federation (IPPF), oral contraceptives, which are characterized by their high efficacy, low side effects and good cycle regulation, can also improve women's skin condition and bleeding patterns and are being used by more and more women of childbearing age. At the same time, scientists are constantly working hard to develop more safe and effective oral contraceptives.

In recent years, the contraceptive drugs market has been expanding with an increasing demand for contraception due to raised awareness of healthy reproduction. 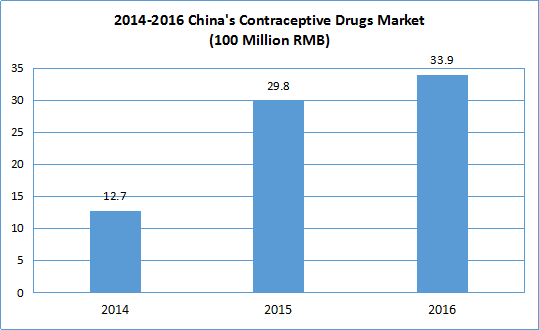 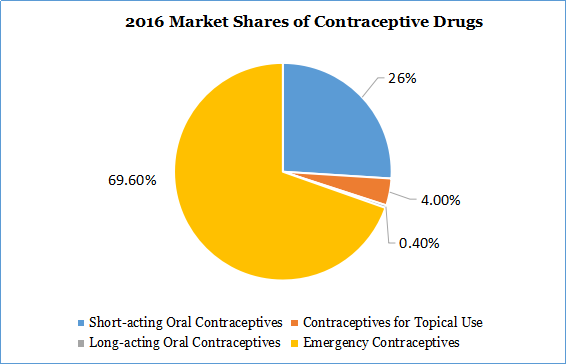 Although there is great market potential for oral contraceptives, there is a noticeable lack of high quality contraceptive products in China. Currently most domestic companies lack the necessary market awareness and with only single product structures and weak independent research and development capabilities (including secondary product development), China has not yet formed proper R&D entities and thus needs to import foreign high-quality products to meet the demands of the domestic market.

It is estimated that China has about 350 million women of childbearing age in need of contraception, creating huge market capacity. Due to the continuous improvement of the family planning policy and social call, population control has drawn great attention from medical professionals. The result of this is that many pharmaceutical companies have become involved in the production of contraceptives and some of them have developed international markets. According to the data of China customs, China's contraceptive drug exports in 2016 was 11,758,000 USD and the major export products were as follows:

IV. Short-acting oral contraceptives may be the new favorite of market

As one of the most effective methods to prevent a pregnancy after unprotected sex, the market is sure to grow. Moreover, the research on contraceptives in the market mainly follows three principles: effectiveness, less estrogen and side effects. Thus, Ddu, the leading global pharmaceutical & medical device B2B online platform, suggests that due to the distinct market potential, there is ample opportunity to explore and develop the short-acting oral contraceptive market in China. As a results of the rise in awareness of the benefits of these short-acting contraceptives, it won’t be long before they replace emergency contraceptives to become the new favorite in the Chinese market.