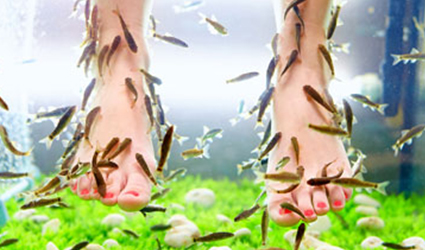 Nowadays fish pedicures have become a popular form of pedicure where fish eat dead skin off a person’s feet. But a woman in her 20’s from New York approached a doctor when her toenails started becoming abnormal. She told the doctor that she had been having the issue for around 6 months, from the moment she had the fish pedicure. There was no pain but a few breaks in her toenails, due to which the bottom portion of her nails got separated from the upper portion.

The patient was finally diagnosed with ‘onychomadesis’, which causes deep horizontal grooves across the nails or huge gaps where there will be no nail. This condition arises when something stops the growth of nails for a while. There are various factors such as autoimmune disorders, infections, hereditary conditions and certain medications that lead to onychomadesis. This however, was the first case where a fish pedicure led to the condition.

Fish pedicures are done by immersing the feet in a tub of water and having small fish named Garra rufa or doctor fish, eat dead skin off your feet. These fish usually eat plankton but if plankton is unavailable, they would eat dead human skin too.

A research team from the United Kingdom in 2012 tested these fish in a lab, where they found two harmful bacteria that causes skin and soft tissue infections.

It’s still somewhat unclear as to exactly how these fish pedicures cause onychomadesis, but perhaps, in future, think twice about where you get your next fish pedicure.