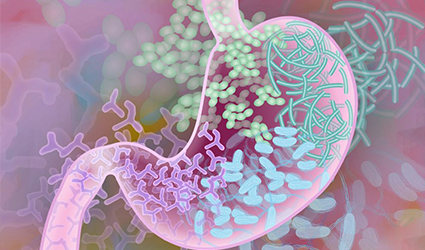 Japanese Scientists unravel a molecular apparatus via which antibodies control gut bacteria to conserve health. They observed that immunoglobulin A (IgA) antibodies released by the intestines can influence how bacteria express their genes.

Senior study author Dr. Keiichiro Suzuki, of the RIKEN Center for Integrative Medical Sciences in Japan, commented that they already "knew that [IgA] contributed in some way to gut health."

However, they were thrilled to find that the "new mechanism" that they discovered "actually promotes symbiosis among the bacteria that inhabit the mucus membrane of the gut." Our guts harbour labyrinthine and varied communities of bacteria and microorganisms that carry out vital functions in health and disease, together called the gut microbiota. They noted that a common species of human gut bacteria called Bacteroides thetaiotaomicron "was specifically vulnerable to coating by IgA."

In this study, the scientists explored the molecular foundation of this process. The results suggested that IgA influences gene expression in B. theta. These proteins were called "mucus-associated functional factors” (MAFFs) by Dr. Suzuki and team, and they discovered that they appeared to promote friendly gut bacteria in two ways.

The MAFFs appeared to help B. theta multiply in the mucosa of the gut simultaneously stimulating it to release molecules that promote the growth of Clostridiales and other good bacteria. The researchers validated this favorable effect of MAFFs in mice. They injected the mice with B. theta that were unable to produce plenty of MAFFs. The mice's gut bacteria transformed and the animals became susceptible to colitis.

The team expects that the results will ultimately give way to newer treatments for inflammatory bowel disease.