Missed Opportunities: Why Small Biotech Needs To Plan Ahead For Global Reach – media

Why Small Biotech Needs To Plan Ahead For Global Reach 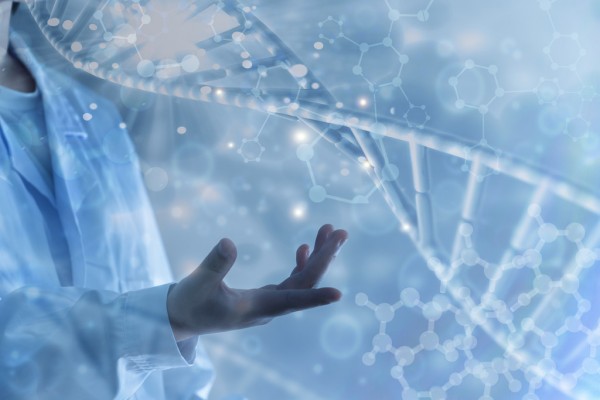 Global R&D spending by biotech has been well ahead of the rest of industry according to 2021 statistics. Publicly traded biotech spending on R&D was more than three times that of the industry as a whole between 2001 and 2020. This R&D investment is leading to regulatory success. By the end of 2020 the US FDA had approved 478 products, compared to 127 at the end of 2001.

Despite the regulatory success this is not translating into consistent commercial success. L.E.K. analysis found that 40% of all US biotech launches between 2006 and 2016 underperformed projections by more than 20% with small biotech more likely to miss targets (see Exhibit 1). The reasons are varied, but not anticipating market access challenges is an important factor. 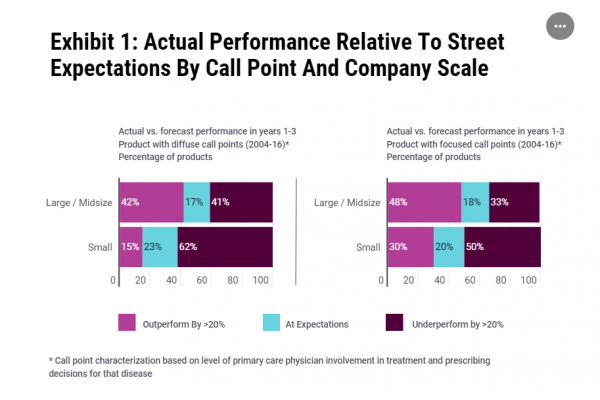 2021 McKinsey analysis also found that with a three-fold increase in the number of first-time launchers in the past 10 years, very few were able to successfully launch and exceed analysts’ pre-launch forecasts compared to experienced launchers.

Both small biotech and the newbies (which overlap) could therefore be leaving value on the table, and that is in the US alone.

It is more difficult to assess biotech commercialization success outside of the US due to a lack of concrete statistics. It is no surprise that available statistics focus on the US, as this reflects the strategy of many small biotechs.

The US was home to 46% of companies doing R&D in 2021 according to Citeline’s 2021 pharma R&D annual review. US revenues can be the highest; 17 of the top 20 top-selling drugs in the world in 2020 made more in the US than in every other country collectively according to Public Citizen. For some small biotechs there has been a view that business from outside the US was a bonus, not a commercial imperative.

But even success in the US cannot be taken for granted. Biogen, Inc. saw sales of $300,000 in the third quarter of 2021 versus analyst expectations of $12m for Aduhelm (aducanumab). Reluctance to prescribe reflects not only mixed trial results for the amyloid-directed monoclonal antibody treatment for Alzheimer’s disease but uncertainty over Medicare decisions on reimbursement which do not even formally consider price.

Too Little Too Late In Europe?

Europe is often the next region in line because of its spend on branded drugs. Yet commercializing in Europe might not be on the biotech leader’s mind until the establishment of European leadership teams or submission for marketing authorization.

Shaping up US payer strategy can be achieved in the year prior to FDA approval, but delivering compelling payer submissions in Europe requires a longer lead time. The evidence required must be built into, or run concurrently to, Phase III studies. Guidehouse  analysis shows that early is unequivocally better for companies that launched their first products in the US between 2016 and 2018. Companies launching for the first time who spent more on total selling, general and administrative expense earlier not only performed better against forecasted sales but also turned higher profits than their late-spending counterparts. Logic dictates that that pay-off from early work to support commercialization will also apply in Europe.

Successful first-time launchers in the US who saw delays in authorization were able to turn that to their advantage, using the time to invest in commercial development. That included putting execs in place that covered commercial, patient advocacy/services, business planning, and sales and marketing two to four years before launch.

Out-licensing is an alternative way to get biotech’s products to European patients. Yet for biotech to maximize the value of such deals, they must be able to outline a robust and defendable go-to-market strategy for Europe when negotiating with potential partners.

Even small biotechs planning to exit before reaching the launch preparation phase are missing a trick. It is tempting to just focus on the science or expect that an acquiring company can take care of the detail in Europe. Yet decisions that biotech make during development have major implications for realizing the commercial promise of an asset. That is because the outputs from clinical development programs have become key not only for regulators but also for payers and HTA agencies decision-making on market access.

Even when Europe is on the list for small biotech, there may also be a tendency for biotech to look to do the best that it can within their funding envelope. This should be turned around; if biotech is to realize the potential of the products that they are developing and looking to commercialize in Europe, they should be identifying the resources needed for success. Tim Haines, chair of bioscience investment firm Abingworth, told In Vivo, “There is more capital available to small biotech today than ever before and limited resources are not an acceptable excuse. Regardless of funding, we expect all our companies to lay out a clear and independent path to market for key geographies.”

The role of investors like Haines is key. Broad brush models that are relied upon to inform asset valuations are helpful, but these need to become more nuanced and account for the payer power that shapes revenues ex US.

In fairness to biotech, part of the issue is that success in Europe can be tough to achieve. Despite steps to bring more harmonization when it comes to health technology assessment (HTA) through the ongoing work of the European Commission and the EUnetHTA initiative, Europe remains a fragmented marketplace. Whilst it is just one case, US-based biotech bluebird bio, announced in August 2021 its decision to focus on the US and exit Europe. This news came just three months after becoming the first-ever biotech to achieve EU marketing authorization for two gene therapies, proving just how hard it can be to secure access in Europe. (Also see "Bluebird Bio Decision in Europe Is A Wake-Up Call For Payers and Industry" - Pink Sheet, 30 Aug, 2021.)

Biotech Needs To Put Europe On Their Agenda

Meeting unmet patient needs should ultimately drive R&D to ensure focus on value that will be recognized. This should lead to regulators and payers providing access and returns for companies and their investors. That is easy to say, yet difficult to do in practice. Ensuring patients actually get access – wherever they are – is when the real value of R&D is realized and not just at regulatory approval.

Biotech can no longer afford to take a US focused view and leave value untapped in other major markets. The economics is stark even for large biopharma companies. Deloitte analysis estimated that the return on investment for 12 large cap biopharma companies was 10% in 2010 but fell to under 4% in 2016 and 2017. The drivers of this fall in ROI reflect the increased cost of bringing an asset to market – $1.2bn in 2010 to $2.0bn in 2017 – and falling average peak sales – $820m falling to $470m in the same period.

Securing commercial success in the US is only going to get tougher. The US has been learning from Europe; the US-based not-for-profit Institute for Clinical and Economic Review (ICER) has brought HTA into the mainstream. Perhaps unsurprisingly, a 2020 Deloitte survey of US pharmacy and medical directors, chief medical officers, population health directors and others involved in formulary design and access decision making predicted that cost-effectiveness will become increasingly important in the next five years (see Exhibit 2).

The importance of cost-effectiveness is not recognized by payers alone. Joep Muijrers, general partner at private equity firm Gilde Healthcare, told In Vivo, “The European landscape provides a number of lessons for anyone interested in integrating cost-effectiveness and outcome measures into commercial launch strategies across the globe. Given Gilde’s investment focus on companies that deliver better care at lower cost, this is of high relevance to us." 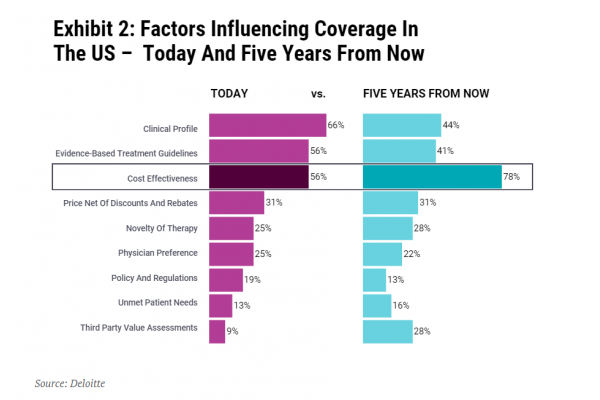 Thinking ‘Europe’ – where many countries conduct cost-effectiveness analysis – when it comes to market access is only going to help biotech in the US too. Ultimately, small biotech and their investors, simply cannot afford not to put Europe higher up on their agenda. Europe also shapes payer practices way beyond its borders. Getting it right for Europe will help increase the global opportunity and commercial value for biotech assets.

Some small biotech are already working hard to tap into the opportunities that earlier and better planning for European market access presents. Mereo BioPharma Group plc, a UK-based clinical stage biopharma company is already anticipating and seeking evidence that will help place setrusumab for the treatment of osteogenesis imperfecta (OI), an inherited bone disorder, into the patient context. Mereo, with others, has worked on the IMPACT Survey to gather data on the impact that OI has on people with OI, their families and their caregivers. “Having a scientifically validated dataset developed in collaboration with the OI community will be a key piece of evidence to help health authorities understand the potential contribution of setrusumab to improving outcomes,” explained Denise Scots-Knight, Mereo’s CEO. “With unaddressed rare diseases, there is a lack of information on which reimbursement authorities can base decisions, so we have sought to rectify that issue,” Scots-Knight added.

What Does Small Biotech Need to Do?

Start with the end in mind: Small biotech needs to think like big pharma; they need to start with the end in mind and that means having a plan for commercializing in the US and the big markets in Europe at the start of clinical development. Considering market access far earlier than the year before launch will unlock commercial potential ex-US. Earlier thinking is also going to be crucial if small biotech – or their acquiring companies – will face being reviewed by ICER.

Make a small Investment in the right expertise: Starting with the end in mind does not necessarily mean a big investment for small biotechs, but rather a laser-focus on what matters most to payers. Expertise needed at the early stages of thinking about commercialization in Europe does not have to be a full-time person or even a big consulting project. A small investment through having a non-executive director or true expert advisor on hand can be enough. Small biotech do not necessarily have to do everything that a consultant suggests either. Getting advice is important to identify only the specific work needed to prepare for European commercialization and no more than that.

Make small changes to clinical development plans:  Considering market access requirements in Europe does not mean re-thinking the whole clinical development plan. It might be a case of making small changes to the Phase II trial and following that through into the strategy for the Phase III trial. Adding new endpoints for example may be appropriate. Small biotech needs to be willing to not only do the thinking but be prepared to make those changes early on.